One of the most interesting parts of every video game, apart from the gameplay itself, is the lore and the story that backs up the gameplay and gives it a lot of flavor and context. Apex Legends follows that trend, having a rich and expansive lore that spices up the amazing gameplay. If you dive deeper into the lore and analyze small interactions that occur between legends in Apex, you may be surprised to learn about their intertwined relationships, especially the romantic ones.

Keep in mind that these lore-related romances are fairly speculative, and subject to change as the game further evolves and develops.

The first potential romance we’ll talk about is the one between Revenant and Loba. This is probably the most twisted and convoluted relationship in the game as it’s based on both love and hatred these two legends have for each other.

If you’re any familiar with Revenant’s lore, then you’re aware that he is a simulacrum that simply wishes to die in peace, but he cannot directly end his life as he’s programmed not to be able to. That’s where Loba kicks in, and her hatred towards Revenant plays a big role in the development of this relationship. Revenant does not directly like Loba, and vice versa, but he instead wants to lure her into finally killing him and allowing him to rest in peace.

That being said, there are a lot of voice lines in the game in which Revenant and Loba directly flirt with each other and voice lines in which Revenant is very protective of Loba towards other legends as well. Respawn also teased a potential romantic relationship between these two by releasing the “No Love Lost” skin line that sparked up a lot of controversies when it comes to the future development of their romantic relationship.

All in all, the romantic story of these two legends is something that Respawn will surely visit sometime in the future, but for now, the relationship seems like an unfinished product. 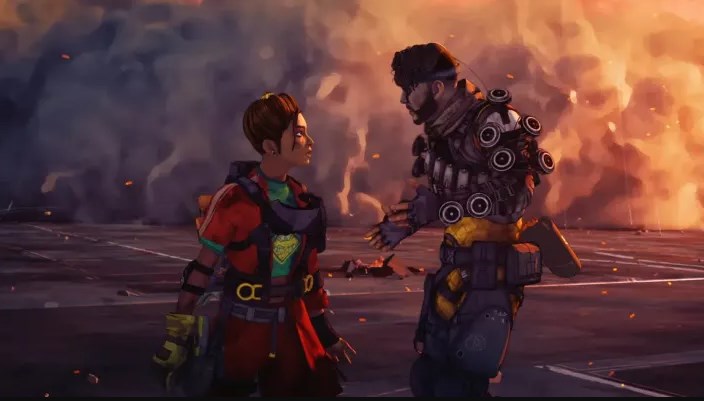 The next romance on our list is thankfully much more straightforward than the Revenant and Loba one, and this one is between Rampart and Mirage. The first thing that suggests that these two may be fond of each other is the in-game interaction they share in which Rampart says that Mirage is lucky that he is as handsome as he is because he’s not very smart.

There are other art forms, interactions, and comic book teasers that suggest that Rampart likes Mirage, but that Mirage is completely oblivious which makes sense knowing Mirage’s silly personality. The biggest obvious issue with the realization of this romantic relationship is that it’s largely one-sided because Rampart is the one that fancies Mirage. However, this does leave a lot of space for Respawn to build upon this relationship in the future, and maybe we could see Rampart and Mirage being a real couple somewhere down the line. 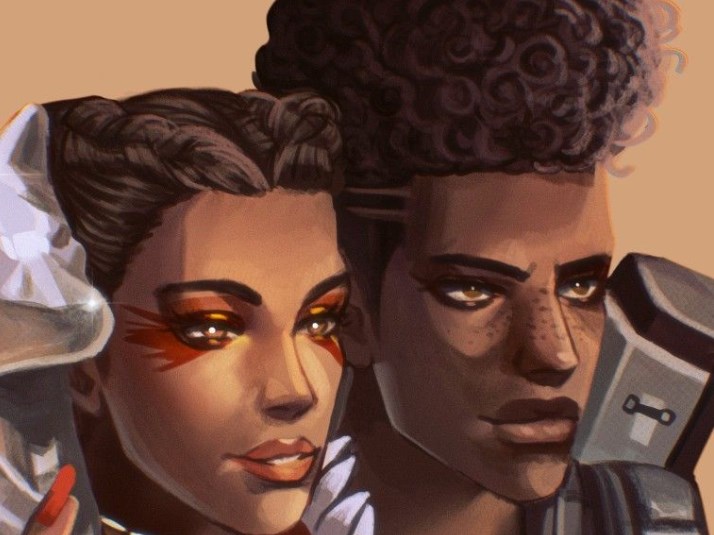 The last potential relationship we’ll talk about is between Loba and Bangalore, two legends that are probably most likely to end up with each other among the couples we’ve talked about.

It’s funny that the factor that initially sparked up this theory is a tweet by one of the devs that reveals that Loba is in fact bisexual after a fan realized that one of her voice lines reveals that. Bangalore, on the other hand, is much more kept to herself because of the strict lifestyle and the ideals she believes in. Furthermore, the relationship just makes a lot of sense. Bangalore is a crime-fighter while Loba is an outlaw and a thief. Opposites, at the end of the day, do attract. Some of the voice lines and interactions between these two characters also suggest a love story that’s in development, but due to their differences, their romantic relationship would surely suffer a lot of hardship.

In conclusion, Respawn did a great job by creating a vibrant lore setup that they can always expand upon and introduce novelties. The best segment of these complex relationships is that we, the players, have a lot of space to speculate and use our imagination when it comes to these love stories. If you’ve enjoyed this article, make sure to pay our boosting section of the website a visit where you can find the most affordable Apex Legends boosting services, specifically catered for your needs and your wallet.