Honor Levels and Rewards in League Of Legends

Toxicity is the plague that follows every multiplayer game because of the competitive environment that is created by the player base. Unfortunately, League of Legends follows that stereotype, and if you’re underperforming, you’re bound to get flamed by your teammates in some games. Also, if you have under performing teammates, you will most likely flame them like you are an L9 player. In order to prevent that, Riot implemented the Honor level system that rewards players for cooperating with their teammates, staying cool, and maintaining a positive attitude. Additionally, Riot continuously rewards the players who decide to maintain a positive attitude in games by increasing their honor level and awarding them with amazing rewards. That’s why, in the following article, we’ll take a closer look at Riot’s Honor system and which rewards you can obtain.

How Honor works in League

At the end of each game, no matter the gamemode, every player gets to honor one of their teammates for one of these positive traits:

If a certain player receives 3 or more honors after a game, a message will pop up saying that they were the most honorable player on their team. Additionally, if every player honors somebody in the lobby, every player gets a bonus in their Honor level progress, which we’ll discuss shortly. Generally speaking, even if you don’t like your teammates, it’s worth honoring someone after each game as there’s a chance that you’ll receive Honor level progress afterward. 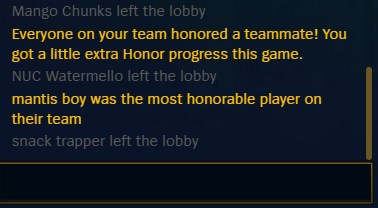 Depending on whether you were a good boy or not, your Honor level ranges anywhere from 1 to 5. If you get honored often, your honor level will rise and you’ll get sweet rewards.

On the other hand, if you continuously flame your teammates and troll games, you’ll most likely get reported and suffer some consequences. At first, you might experience slower honor progress or even a chat restriction for a number of games. Additionally, if you keep getting reported, you might be banned for 14 days or permanently, depending on the severity of your actions. This is more common in very high MMR games.

All in all, if you decide to be nice, you’ll end up increasing your honor level and you’ll get rewarded in the process. Each honor level has 3 checkpoints that you need to pass before reaching the next honor level.  Keep in mind that you start your honor at level 2 and work upwards, and you'll only drop to levels below it if you misbehave or intentionally feed games.

Once you reach level 3 or higher in your Honor level progress, you become eligible to earn loading screen flairs. In order to earn these flairs, you need to be honored by two premades or one non-premade teammate. These flairs last for one game only and they appear above your loading screen. Additionally, there is no game-limit cooldown when it comes to these loading screens so you can effectively earn them every game if you stay honorable.

If you end up obtaining honor level 5, upon reaching it you’ll receive an honor 5 token which you can use to purchase one of the following cosmetic items:

Tips for increasing your Honor level

While there aren’t any straight cheats and speedruns to Honor level 5, there are some tips that you can follow which will make your journey a lot easier and shorter.

First of all, the most obvious tip is to stay positive when it’s tough. When the game is a bit tricky and the situation is difficult because your teammates are feeding, you should try to keep the spirits up by encouraging them to play better instead of flaming them. Additionally, if somebody is flaming you on your team, you shouldn’t respond to them and ignore them instead. Using the /mute all function to mute all of your teammates is sometimes beneficial when playing under these circumstances, as it will help you focus on the game instead of chatting with your teammates.

The second tip is to honor everyone after the game as it speeds up your honor level progress and can benefit you in the long run. Additionally, you can try playing ARAM games as they’re surrounded with relaxed teammates that are more likely to honor their team after the game, no matter the outcome. Normal games are good for this purpose too, even though some people tryhard normal games as well. This will not only boost your honor level, but will also help you obtain as many level up rewards as possible.

Last but not least, remember to hype up and cheer on your teammates after they make a good play as they’re more likely to remember those kind words when honoring someone after the game ends.

Don’t leave games or insult the opposing team, as they’re also eligible to report you and get you punished if you misbehave. Try to shotcall for baron, other neutral objectives, and help your team out with pings. Last but not least, remember to have fun and stretch after each game. Enter every game with an open mind and you’ll surely level your honor up in no-time.

It is often confused that getting a higher ELO or getting an elo boost will help you achieve higher honor levels, but this is far from truth; as your ELO has no direct effect whatsoever on your rank, you can even be an unranked player while still maintaining a very high honor level in League Of Legends.