With the massive increase in popularity of Rocket League as the game went free to play last year, thousands of new players embarked on their vehicular soccer journey. After learning the basics of the game and some core mechanics, it’s crucial to understand the game’s complex trading system if you want to get good deals and make a consistent profit. In the following article,  we’ll teach you the basics of trading in Rocket League as well as share some useful trading habits and tips.

Trading items is much like getting boosted in rocket league, you need to be extremely careful, and only deal with trusted parties.

The basics of trading

If you’re completely new to Rocket League, this is the place to start, as we’ll guide you through the basics of trading. Before you start exchanging items with other players, Rocket League has a pre-existing requirement of purchasing 500 Credits from the store, in order to reduce fraud. However, this does not apply to any players that bought the game before the Free to Play update. Once you make the purchase, to start trading with another player, you have to add them to your Friends list first. All you need to do after you’ve added each other is to send an invite to trade by clicking on their profile avatar. At that point, the trade can begin.

This is the list of tradeable items in Rocket League: 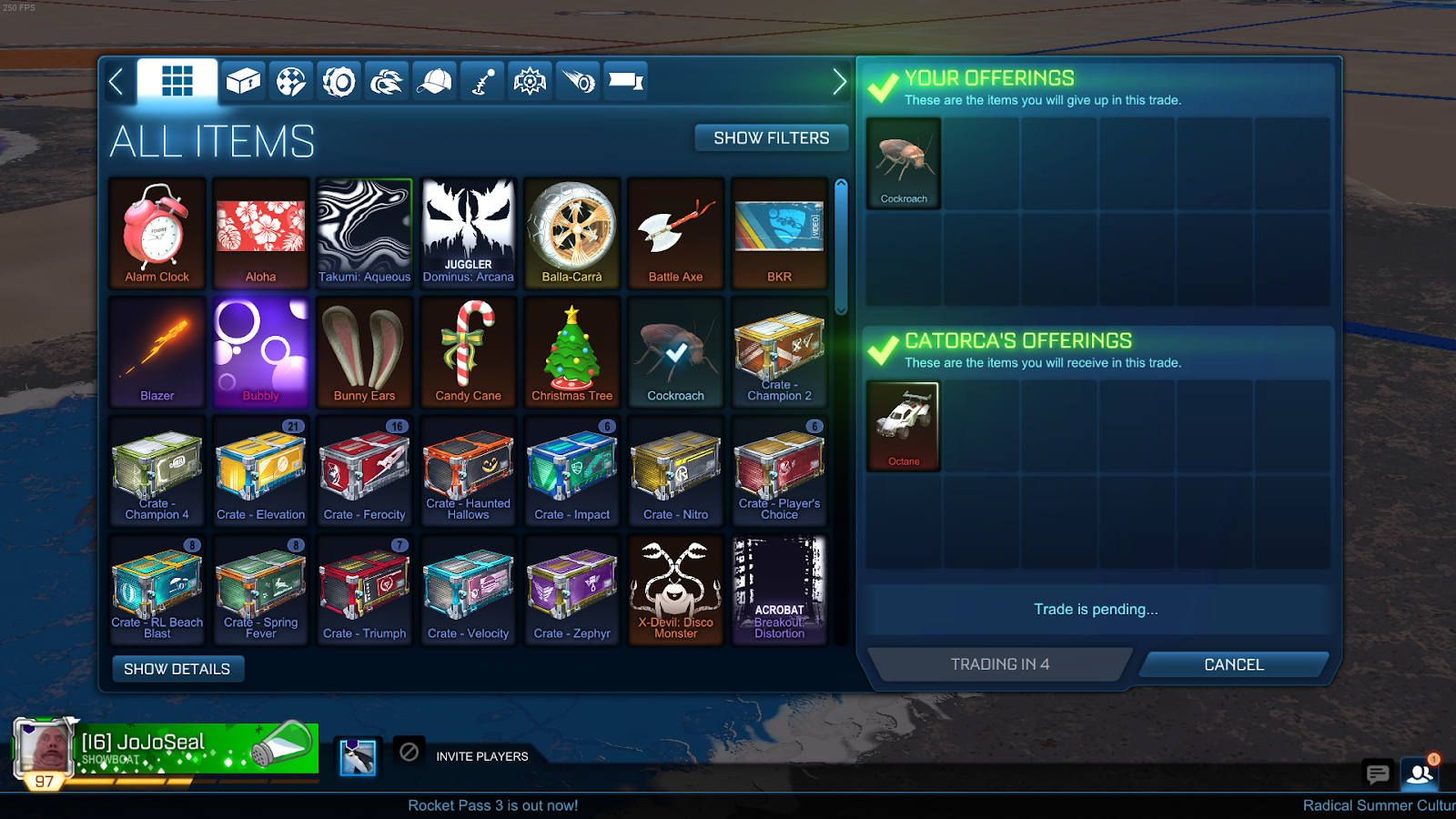 One of the best ways to find groups of Rocket League players that want to trade is to enter Rocket League private trading groups, Steam discussions or online websites that host trades.

Keep in mind that the trades are final and non-reversible, so if you complete a trade with someone there is no way to take it back. Don’t lend an item to a stranger if they ask for it since it’s likely a scam and be aware of the value of the items you’re trading/selling. If you don’t know the value of your items, there are numerous sites where you can check the value of your inventory, depending on the platform you play on.

Going from nothing to something

Once you’ve figured out the basics of trading, you’ll normally want to start growing your inventory. Keep in mind that, if you’re starting from basically nothing and you don’t want to invest any money into the game, it’s going to take a lot of work and patience to obtain some items.

On the other hand, if you’re able to spend some money on the game, the Rocket Pass is undoubtedly the best purchase you can make. Buying the Rocket Pass is the most cost-efficient way to obtain credits as well as other cool rewards, as you can get up to 1000 credits just by playing the game. That being said, the rest of the article will be aimed at players who don’t want to spend any money on the game apart from the initial 500 credit purchase.

Let’s say you’ve logged into the game for the first time, you have 0 credits and no items. What do you do? The answer may be more obvious than it initially seems but just play the game. By playing the game, you’ll be able to get numerous free items as you progress. Additionally, you can complete the challenges which can occasionally reward you with very rare and valuable items.

Furthermore, you can get a couple of free items by redeeming the codes “POPCORN” and “RLNITRO” in the options menu.

Play the in-game events and get free prizes

Rocket League, like many other games, has special events which occur every once in a while in which players can obtain various prizes. By playing the game and completing the event challenges, players can earn the event currency which they can later exchange for event gift packs. Those gift packs can be sold for a price of 150-200 credits, with some of them demanding a  300+ credit price tag, depending on the items you can get from them. By selling the free packs that you earn from playing these events, you’ll get anywhere from 500-1000 credits, which you can turn into a bigger profit later on. If you’re feeling lucky, you can open those chests and keep/trade the items they contain, but it’s generally safer to sell them for credits.

If you want to become an expert in the Rocket League market, earn more credits and expand your inventory, you have to understand the nature of the market itself.

Firstly, there are no firm prices on any item in Rocket League. There are dozens of sites that can show you the range of low and high prices that the item sells for and it is up to you to make a good sale for yourself. More often than not, items will sell for a low-medium range value that is showed on the market, but that doesn’t necessarily define a value of an item.

Just like every market without a firm price, Rocket League’s market is based on supply and demand. That basically means that highly desirable items can be sold for a higher price and some items that the players generally don’t want can be completely worthless. Additionally, some players will pay more if they really need a specific item and if the supply of a said item is low. Buyer preference is very important and you should look out for people that are desperate to buy an item they’ve been looking for a long time, as they’re more likely to pay more.

Last but not least, make sure to download RL Garage and RL Trading Post, as they’re the two premier trading websites where you can easily find trades and make connections with other people. Additionally, use RL.Insider.gg to check the value of your items when you’re trading or selling.

Now that we’ve explained that you actually need to possess something lucrative in order to make a sale, let’s go over how you can generate a consistent profit. Buying cheap black market decals and reselling them has proven to be a successful trading strategy over time, as they’re both desirable and affordable (to a degree). Generally, you’ll need to invest your credits to purchase some of the lower-end black market decals and the fun begins there.  From that point onward, it’s your job to resell the item you’ve purchased for a small profit. If you sell something for a 20 credit profit, you’re already making steady progress.  In fairness, 20 credits aren’t a lot but if you’re patient enough and if you keep reselling items and making small profits, you’re bound for success.

Keep in mind that Rome wasn’t built overnight and that the people that have thousands of credits worked for a long time to get there. If you can make five 20 credit profits a week, that’s already 100 credits in the bank, and 5000 credits if you end up doing it for an entire week.

There is also a chance that you’ll end up getting lucky by entering a very favorable trade, which will massively increase the profit you generate. You might end up running into someone with tens of thousands of credits who doesn’t care if he’ll spend 100 more credits to obtain an item he really wants.

Apart from black market decals, some of the best items to resell are:

The main factor that sets apart these items from other stuff on the market is the in-game demand and the fact that you’ll likely make a swift sale. For example, Painted Octanes and Fennecs are the two most popular cars in the game and you’re very likely to find someone who’ll pay a higher price if you have the color the buyer desires.

Last but not least, a good alternative for buying any of the aforementioned items, if you don’t have enough credits, is to obtain uncommons (both non-painted and painted), non-crate rares, non-crate very rares, and non-crate imports. These items are easily sellable because players can trade them in for more exclusive ones and therefore it increases the overall demand. Additionally, the beauty of those items lies in the fact that almost anyone has them and that you can easily get them by trading with people that are unaware of their value.

The last tip, but certainly not the least important one, that is mostly applicable to newer players is not to get scammed by more experienced fish in the sea. As a new player, you have to understand that you’re a prime target for scammers out there. Of course, it’s easier said than done but it’s impossible to overstate how big of a setback it is to get scammed if you’re trying to patiently grow your inventory.

Know the value of your items by checking their value online before accepting a trade and don’t buy items that are quickly losing value on the market, even if you can get them at a cheap price. Check every item before clicking the accept button and don’t get rushed by the person you’re trading with.

Having good items and cosmetics is one thing, but having a higher skill level which allows you to get into good tiers is another. So make sure to be able to consistently improve at the game and keep up with other players!

Good luck on the market!