With the release of Riot’s brand new FPS shooter Valorant and the recent introduction of a ranking system within the game itself, many people are curious to know how exactly how this ranking system works. Almost all online games have some sort of ranked game mode for people who strive to improve and progress in the game. The best way to track this progress is by having some sort of implemented ranked system with differentiated tiers. Riot usually tends to have highly competitive ranked game modes and Valorant is no different. They have implemented a ranked system where your rank is calculated not only based on the number of games you win but also your individual performance as well. This is a very good blend of factors to take into consideration when trying to determine the rank of a player. In this article, we will talk about what factors determine your rank and by how much, the general structure of the Valorant competitive system, how it created a whole new sector in the boosting industry.

Before we get into the intricacies of how the mechanics and fundamentals of the ranked system work, we will take a look at the most basic part of the competitive ladder which is the ranks themselves. While the system of competitive in itself is slightly complex the ranks are pretty simple to understand and what they represent.  There are eight basic ranks in Valorant: Iron, Bronze, Silver, Gold, Platinum, Diamond, Immortal and Radiant (formerly Valorant). Most of these ranks are further divided into tiers, each rank excluding Radiant is divided within itself into three further tiers, for example Iron III, Iron II, Iron I. The higher the number of the tier the higher you are on the competitive ladder, meaning an Iron III player is higher up on the competitive ladder than an Iron I player. The ranks themselves are rated from Iron, being the lowest, to Radiant being the highest achievable rank in the game. Radiant is the only rank that is not further divided into smaller tiers. This rank was previously named Valorant but Riot decided to scrap that idea due to the confusion that was created because of the same names for the top rank and the name of the game itself. Now we will talk about the way the competitive ladder works and what determines in which of these ranks a player will end up in. 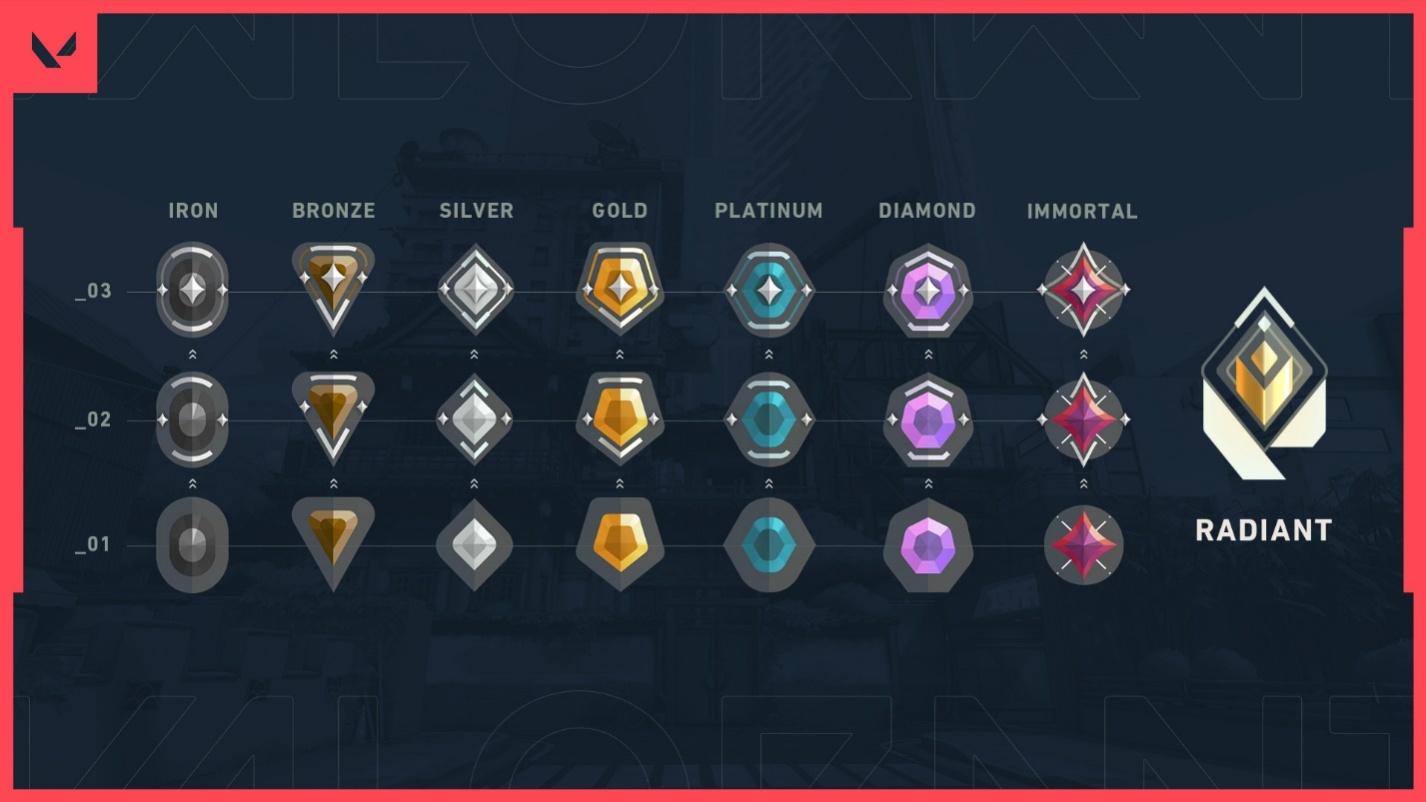 Now we will be discussing how exactly the Valorant ladder works and what impacts the way you climb the ladder.  First of all, we must address MMR short for matchmaking ratio, which basically determines how good you are at the game based on wins and individual performance somewhat. MMR is essentially a number tied to your competitive progress which Riot uses to match you accordingly to your skill in the game. MMR determines the skill level of both your teammates and your opponents as well. Simply put, the higher the MMR, the higher your rank is.  Before you can even begin to play competitive you will have to play 20 casual matches to get a slight grip on the game at least. After playing the preliminary casual matches you will have to play out 5 provisional matches that will based on your performance determine which rank will be your starting point for your climb.  In the placement matches, emphasis is put on personal performance to determine your rank, but when you finish placements winning becomes a far more prevalent factor to increasing your rank. While winning is the most important factor in influencing your rank, individual performance, and the nature of the win or loss are also taken into account. By doing this Riot is trying to encourage and emphasize team play above all else, so trying to keep a good KDA (kill, death, assist) ratio could negatively influence your rank if you still lose a lot. While having a good KDA in winning games is optimal as it will identify to Riot that you are superior in skills to the peers in your current rank, helping you progress faster. Being dominant in your wins is also an important factor in increasing your rank. This combination encourages players to play at their best for every single round to reap the maximum amount of rewards possible. In the Immortal and Radiant ranks wins and decisiveness of wins becomes the prevailing factor in maintaining rank and KDA becomes far less relevant, because at this point Riot trust the players in these ranks to fulfill the role their team needs them to take. Let’s talk about premade matchmaking and how queueing up with your friends will work. You can only queue up to play competitive with people within 2 ranks of your own, meaning 6 tiers. So for example a Gold I player can queue up with a Diamond I player but he cannot queue up with a Diamond II player as his rank is considered too high. Likewise, a Gold player has no chance of queueing up with an iron player regardless of the tier of the iron player. Riot will automatically balance out any teams with a high variety of players to match up against a similar group of premades. The goal is to further encourage team play and place prominence on team play because of the very nature of the game. Riot will prioritize to match players playing solo or with a smaller group of premades with enemies who also lack full teams. This is especially significant in the higher tiers of play, as it is considered that team play is far more important the further you climb. The final topic of this article will be the so-called Acts or better known as ranked seasons in Valorant.

Acts in Valorant are very similar to ranked in other multiplayer games. meaning the amount of time you have to climb the ladder and achieve your ranked goals before the season resets together with your rank. These acts last about two months and after the end of the season, you will have to play another three provisional games to determine your rank again. The reason for reducing the number of games from five to three is because you will already have your past season MMR to help in placing. The first act was called Ignition and the second act dropped on august the 4th. After the end of an Act you receive an Act rank. A Valorant Act rank is basically your overall rank during this act and what you rank you end upon. This is determined by your performance in your nine best wins and your overall number of wins. You also receive an Act badge that you can use to show off all your accomplishments during a ranked season. The function of the badge is very simple. For every win you receive a small triangle on your badge in the color of the rank you won in, later on wins in higher ranks will replace the ones from the lower rank.

The highly competitive ranked system in Valorant triggered people to start wonder about their own skill level in the game, and some people believe their skill level does not match their rank. So like with any competitive game they head to boosting. Valorant duo boosting gave people a way to improve their rank without feeling so bad about getting boosted, or risking their account information, and it still gave boosters a good way to make money playing their favorite game, and benefit from their own skill in Valorant, specially during this covid-19 pandemic which many people's job is suspended.
OUR LATEST BLOGS
Can boosting in Valorant be a sustainable career path?
Is Valorant Boosting unethical?
How to be prepared for new ranked act in Valorant
How to win with bad teammates in Valorant
Valorant boosting world record (Iron - Radiant in 72 hours)