TFT Ranked system and how to approach it

It’s been over a year since Teamfight Tactics premiered in July of 2019 and the popularity of this round-based strategy is rising among League of Legends fans and other auto chess enthusiasts. This increase in popularity was further pushed by Riot releasing TFT for mobile and enabling cross-platform support, meaning you can play with your friends no matter the device you play on. Consequently, TFT’s ranked play is blooming at the moment and more and more players are exploring the competitive ladder every day. If you’re one of those players who are still unfamiliar with the ins and outs of TFT’s ranked ladder and want to get competitive, you’re in luck. In the following article, we will analyze the TFT ranked system and what’s the best way to approach it to get the best ranking as soon as possible.

In Teamfight Tactics, unlike League of Legends, anyone can start playing ranked at level 1 as soon as they create their League of Legends account. While it is recommendable to get some practice in before you embark into ranked, if you’ve decided to take the next step and start playing TFT competitively, you’ll need to select the ranked mode below the normal mode you’d usually play. The ranked matches are, just like the normal ones, played between 8 players. You’re considered to be a victor if you finish in the top 4 and you’ll win or lose LP based on your in-game ranking. For example, the first-placed player will win more LP than the fourth-placed one, just like the last placed player will lose more LP than the player that was fifth. Just like in League, TFT’s ranks are ranging from Iron to Challenger, with the majority of the game’s population ranking in Silver and Gold. Statistically, over 50% of TFT’s ranked players are in Gold or Silver and just by becoming Platinum, you enter the top 10% of TFT’s ranked ladder. Every division is separated into 4 tiers and you climb each tier by reaching 100 LP. Fortunately, you don’t have to play the promotion matches you’d usually play in League’s ranked system. Generally speaking, it’s easier to climb the TFT ranked ladder than the League of Legends one, but you’ll still need to grind a lot to reach the highest ranks on the ladder. Additionally, you can play TFT with up to three premade players, but the difference between your ranks cannot be too high in order to avoid unfair matchmaking. The picture below appropriately explains how the premade matchmaking works in TFT. 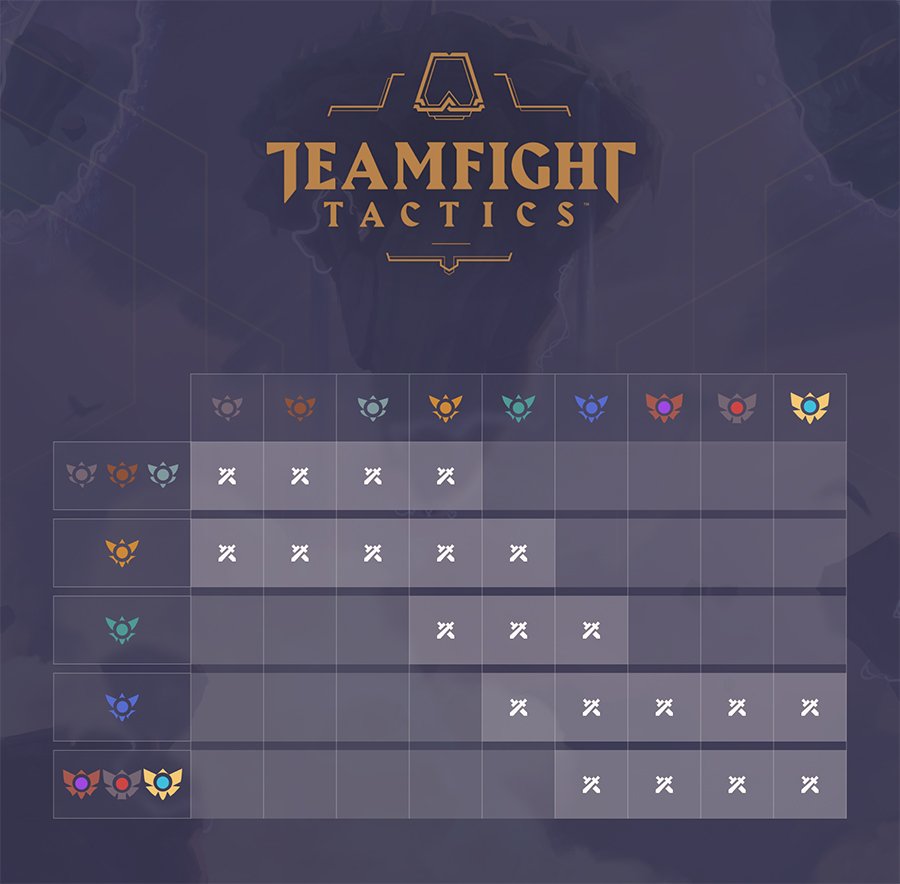 For anyone who’s a seasoned League of Legends player, placement matches are nothing new. In League, at the beginning of every ranked season, you’re required to play 10 matches that will determine the rank you start with for the season. Teamfight Tactics followed suit and you need to play 5 placement matches after which you’ll be placed in a certain division. Do keep in mind that these matches are important and that we offer specific placement match boosts that will ensure you begin your ranked climb on a high note.

Teamfight Tactics’ ranked season is much more different compared to League’s ranked season that lasts for almost an entire year. Beside patch notes, Teamfight Tactics, unlike League of Legends, has a unique system of annual updates in which Riot refreshes the game with new items, champions, game mechanics, balance changes, and cosmetic additions. Those updates are called sets and the game is in its third set at the moment, named the TFT Galaxies set. Once a ranked set is dropped, ranks are completely reset and players have to start their ranked climb anew. Those sets are further divided into smaller acts that function as smaller ranked resets. All players demote for an entire division when an act is implemented into the game (eg. Silver III - Bronze III). Additionally, those acts function as updates that introduce new ranked rewards as well as new in-game passes, new champions, and new Little Legends. It’s best to perceive these sets and acts as new ranked seasons as they’re the closest thing TFT has that resembles League’s ranked system.

While we’ve already covered this topic in a separate article, we’ll give you a short breakdown of TFT rewards and what you’ll be playing for once you start your ranked journey. To earn any type of reward, you need to place at least Gold in ranked, just like in League of Legends. At the moment, Riot is rewarding players that place Gold or higher with Victorious Little Legends, which are characters that represent the player in-game. Additionally, Riot said that they’ll be giving out unique emotes for each rank in the future.

How to approach ranked?

Now you know everything there is to know about Teamfight Tactics ranked system and how it functions, except the best way to approach the ranked experience and get off to a good start. As we previously mentioned, your placement games are important and you shouldn’t start playing them until you’ve properly acquainted yourself with the game’s mechanics. It’s best to play at least 10-20 normal games to get the feeling of the game’s flow, stages, and different mechanics you can use to your advantage when you start climbing. After you’ve comprehended the game’s basics, you should figure out the optimal team comps that suit your playstyle and that are fairly consistent. TFT requires a lot of planning ahead, but it’s an RNG game at the end of the day so you should look to increase your chances of a good result by playing the most consistent strategies available. Getting advice as well as queueing up with some of your friends that have previous experience in TFT is definitely recommendable. All in all, make sure to be confident in your skills before you start playing ranked as you’ll find yourself on the losing end if you rush too much. As always, you know where to find our TFT Boosting service if you need a little push if ranked gets a bit too hard.